The Office of the President and its affiliated offices’ proposed PHP8.9 billion budget for 2023, which includes PHP4.5 billion in expenditures for intelligence and confidential information, was approved by the Senate on Thursday (CIFs).

Senator Sonny Angara, the Senate Committee on Finance’s chairman and the author of the 2023 General Appropriations Act, was able to defend OP’s CIFs, which represented 65 percent of its Maintenance and Other Operating Expenses, following two hours of plenary arguments (MOOE).

Angara defended the President’s CIF, arguing that since the President is an “information gatherer” rather than merely a “consumer of funds,” he should be entitled to a portion of the confidential and intelligence monies.

The P2.25 billion in confidential money and the additional P2.25 billion in intelligence funding to be given to the Office of the President and its affiliated agencies were previously questioned by Senate Minority Leader Aquilino Pimentel III.

Although Pimentel acknowledged that this will only be excluded, he claimed he will offer an amendment that will reduce the OP’s budget for CIF.

The usual complaint about confidential and intelligence funds, according to Pimentel, is a lack of transparency. “Siguro (Maybe) in due time, I will propose an amendment to lower the CIF being supplied to the Office of the President,” he added.

The opposition senator inquired as to whether monthly accomplishment reports, rather than liquidation reports, may be requested from organizations receiving this contentious funding, such as the OP.

Angara claimed that since the two arms of government have a good working relationship, Pimentel’s proposal for Congress to request recurrent reporting on the executive department’s accomplishments would not be problematic. 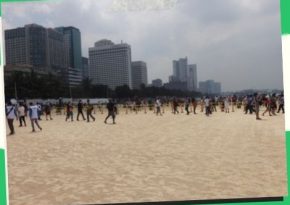 The reopening of Dolomite Beach has been postponed until June 3rd.

Cebuano English Filipino MANILA – The Department of Environment and […]

Cases involving prior clients are barred by the new Comelec executive.