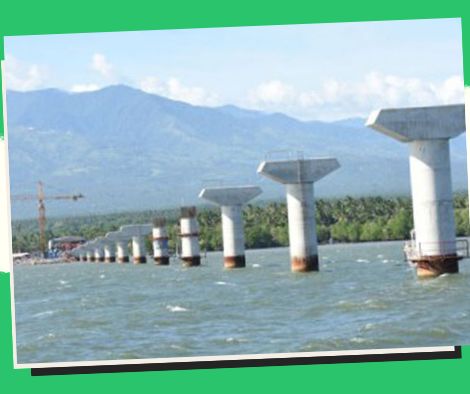 According to the Department of Public Works and Highways (DPWH), work on the longest sea-crossing bridge in Northern Mindanao is now 61 percent finished.

The PHP7.3 billion Panguil Bay Bridge project, which will connect Tangub City in Misamis Occidental and Tubod town in Lanao del Norte, is being built under the supervision of DPWH senior undersecretary Emil Sadain, who oversaw the inspection on Wednesday. He has promised to finish the project by the end of the year.

The project, which started in February 2020, is a part of the DPWH’s ongoing Build Better More Program, according to Sadain.

“The bridge, costing PH7.375 billion and financed by a loan agreement between the Government of the Philippines and Korean Export-Import Bank, not only represents the realization of a long-held dream for the people of Lanao Del Norte and Misamis Occidental, but also a significant step in the development of modern bridge design and construction, the official said in a statement.

Following the final completion of all 54 bored piling works, work on the 36 abutments and pier columns, 32 coping, and the incremental launching technique (ILM) for the superstructure began on both ends at Tubod and Tangub City.

While approximately 336 workers are working around the clock to finish the project by December 2023, the bridge’s construction was hampered in the final quarter of 2022 by Panguil Bay’s strong currents and frequently rainy weather.

But Sadain had faith that they would finish the job on schedule.

When the Panguil Bay Bridge is finished, the two-hour trip from Lanao Del Norte to Misamis Occidental will take just seven minutes.

The design and construction of the structure, which was scheduled to begin in February 2020 but were delayed due to work limitations put in place by the government at the height of the pandemic.

The DA expects that the new administration would put food security first.

Cebuano English Filipino MANILA, Philippines — According to a Department […]

DENR and LGUs should collaborate while studying geohazard maps.

Cebuano English Filipino The Department of Environment and Natural Resources […]

Cebuano English Filipino On Tuesday, Malacanang commended the people for […]

Increased revenue will increase food and grocery delivery in PH

Cebuano English Filipino Even if limits on transportation have been […]