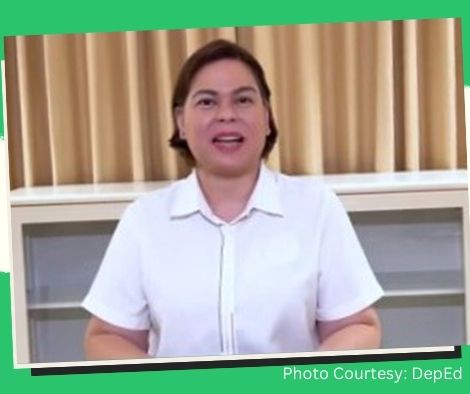 Sara Duterte, vice president and secretary of education, stated on Tuesday that the Philippines is making progress toward achieving a goal set forth in the United Nations (UN) 2030 agenda, notably the objective of providing “inclusive and equitable quality education.”

Duterte outlined the administration’s initiatives in a speech as the Department of Education (DepEd) participates in the celebration of the International Day of Education (IDE).

The new administration is moving in the correct direction, according to this year’s theme, “To Invest in People, Prioritize Education,” she stated.

She said, “President (Ferdinand R.) Marcos Jr. proclaimed our determination to recover the learning losses from the pandemic and restructure our education to be more inclusive, relevant, and resilient to future shocks and disruptions at the UN Transforming Education Summit in September last year.

Duterte said that budgetary allocation has been enhanced in order to solve the learning loss and education mismatch for the future workforce.

“The Department of Education obtained the enhanced funding for the fiscal year 2023 following the eight-point socioeconomic strategy of the Marcos administration,” she stated.

The Philippines are capable of meeting the suggested allocation for a country’s education sector, which is between 15 and 20 percent of the entire government allocations, the education chief emphasized.

The amount of money allocated to the education sector in 2023 increased from PHP631 billion in 2022 to PHP719 billion, which is within the required range of 15 to 20 percent, according to the official.

Duterte voiced optimism for advancement in the years to come by prioritizing education and capacity building for the youth and making the necessary investments in these areas.

“I am certain that this is just the start of our renewed commitment to spending more in education and giving the creation of a workforce that is prepared for the future… With the biggest number of young people in our nation’s history—more than 13 million—we are well-positioned to gain from this demographic dividend, she said.

Due to the difficulties that young people face, according to Duterte, authorities must collaborate closely with all other stakeholders to ensure kid protection.

The second batch of Duterte’s “child protection specialization course for focal persons in the central offices, regional offices, and schools division offices is currently underway.” Child protection experts will then empower child protection committees in schools to safeguard students from abuse and support their overall well-being.

78 complaints had been sent to the DepEd as of the launch via phone calls and emails.

Along with protecting learners’ rights, systems development and fundamental teaching methods must also be a priority.

“Critical areas of concern include the crisis in early-grade students’ basic learning, especially in reading, math, and science… Additionally, we need our educational systems to be more crisis-resistant. According to Duterte, we are currently experiencing both local and global disruptions, such as severe weather and other public health problems.

As DepEd implements desperately needed changes in our basic education sector over the next six years, she continued, “with increasing investments also comes to the duty to invest equitably, efficiently, and innovatively.”

Meanwhile, the department will release further information about these priority improvements on January 30 through its Basic Education Report, including the status, difficulties, and action plan (BER).

The national immunization push will take place from November 29 to December 1.

Cebuano English Filipino Delfin Lorenzana of the Department of National […]