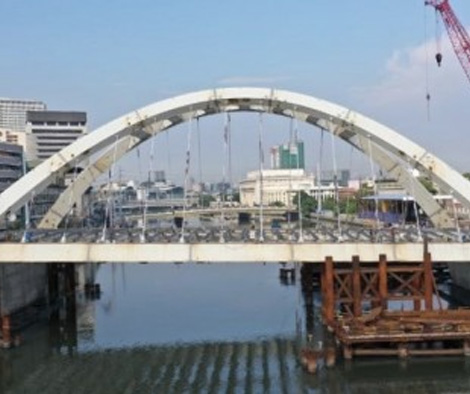 The Department of Public Works and Highways (DPWH) said on Tuesday that the building of the PHP3.39 billion Binondo-Intramuros Bridge, which is being financed by China, is now 70 percent completed.

UPMO Operations Undersecretary Emil Sadain said that civil construction operations for the ramps and viaduct structure are already ongoing, with a goal of completing the bridge in its entirety by December 2021, as reported by the Associated Press.

On the Binondo side, there will be a 418-meter viaduct structure and ramp over the Estero de Binondo, as well as a 298-meter Binondo up-ramp on Muelle Dela Industria Street on the Intramuros side, and a 191-meter up-ramp at Magallanes/Riverside Drive and a 164-meter down ramp on Solana Street in the Binondo side.

The bridge will handle an additional 30,000 cars per day in addition to decongesting traffic on the current Jones, Delpan, and MacArthur bridges, which will assist to prolong the life of those structures.

After inspecting the project on Tuesday, Sadain declared it to be 70% complete, with the 70-meter main bridge over the Pasig River, which has a steel arch and a steel bowstring supporting it, permanently positioned at piers 4 and 5. He also stated that the installation of a pre-fabricated precast slab that is already on site will begin soon.

In addition, the manufactured steel box girders that will be used for the viaduct and ramp across the Estero de Binondo are scheduled to arrive from China by August 2021, according to the project’s executive director.

The bored piles for the up/down ramps and abutments on the Intramuros side have all been finished, while work on the 98 bored piles on the Binondo side, of which 61 have been completed, is still in full gear.

The Department of Public Works and Highways (DPWH) and the contractor are continuing to coordinate with Meralco and Telco for their lines along the Dasmarias Bridge, and strategies are being developed to minimize service disruption. The launching of steel box girders along Estero de Binondo towards Plaza del Conde and Rentas Street, as well as the relocation of affected lines along Muelle de Binondo near the San Nicolas Fire Station, are examples of these efforts to minimize service disruption.

In accordance with the Metro Manila Logistics Improvement Program, the project would solve the long-standing problem of traffic congestion on key highways by building new bridges spanning the Pasig and Marikina Rivers, as well as the Manggahan Floodway, among other things.

With funding provided by the People’s Republic of China, the arch bridge design represents the friendly cooperation between the Philippines and China. It is being constructed in accordance with new seismic design specifications as well as climate change considerations, and it is expected to be completed by 2018.