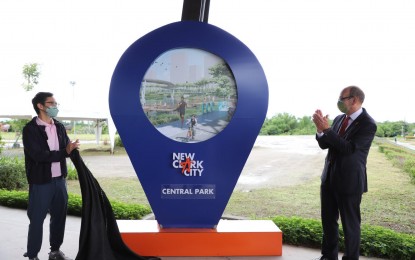 At the New Clark City in Tarlac, a vast 44.8-hectare park inspired by worldwide best practices and Philippine history will soon emerge.

On Friday, President and Chief Executive Officer Vince Dizon of the Bases Conversion and Development Authority (BCDA) and British Ambassador to the Philippines Daniel Pruce unveiled a symbolic marker to lay the foundation for the New Clark City (NCC) Central Park, which will be one of the country’s largest public parks when completed.

New Clark City is one of the experimental sites of the UK Foreign, Commonwealth, and Development Office’s (UK FCDO) Global Future Cities (GFC) Programme, an official development aid initiative that promotes sustainable and inclusive urban development in 10 nations and 19 cities across the globe.

The park’s development will be split into four stages, beginning in 2023 and ending in 2035.

In a statement, Pruce said, “The New Clark City Central Park will be a great example of how we can use our land and water resources more sustainably to foster biodiversity, of how we can allocate green spaces to connect people with the environment and, through that, to promote greater health and personal well-being.”

“New Clark Metropolis was established with the goal of becoming the country’s first green, sustainable, and resilient city, based on the achievements of cities across the globe, particularly those in the United Kingdom. “We are very fortunate that the Foreign, Commonwealth and Development Office chose New Clark City as one of its models, allowing us to participate in this once-in-a-lifetime greenfield development,” Dizon added.

The park will be inspired by a variety of foreign best practices, such as London’s Queen Elizabeth Park, but will retain its distinctive identity by reflecting local culture and history in order to meet Filipinos’ current needs and future ambitions, according to the statement.

It will be connected to New Clark City’s current and future transportation infrastructure, including the Clark International Airport and the planned Clark-Malolos Commuter Rail line.

In September 2020, the BCDA and the British Embassy signed a memorandum of agreement for the design of NCC Central Park as well as an affordable housing project.