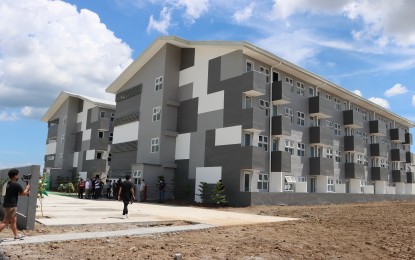 Filipinos are entitled to not just better, but the finest government-provided social services.

Secretary Eduardo del Rosario pledged to offer low-cost housing developments for all Filipinos, indicating that the Department of Human Settlements and Urban Development (DHSUD) is committed to providing excellent service.

“Despite some birth pangs,” he added in an interview on Friday, “we have begun building strong foundations for the future of housing in our nation.”

President Rodrigo Duterte must, according to Del Rosario, promote access to good, safe, and cheap housing units in sustainable communities for the poor and homeless.

DHSUD was established by Republic Act 11201, which was signed into law by Duterte on February 14, 2019, and was charged with establishing Housing One-Stop Processing Centers in areas to consolidate the processing of housing-related paperwork.

Despite the obstacles, the agency is working to fulfill its mission as part of the Duterte administration’s flagship initiative, Building Adequate, Livable, Affordable, and Inclusive Filipino Communities (BALAI).

“The program’s goal is to enhance the government’s efforts to meet Filipino housing needs while also engaging the private sector. As chairman, I think we should all adopt a united stance and go in the same direction as BALAI Filipino “he said

“In keeping with President Duterte’s directive under the country’s development goals, we want every Filipino, regardless of their social status, ay magkaroon ng disenteng bubong na masisilungan, bahay na may maayos na kuryente at tubig (to have decent shelter, complete with electricity and water supply), a house they can call their own and be proud of,” del Rosario said.

Del Rosario made certain that all of the homes are in safe neighborhoods that are “not prone to catastrophes or tragedy.”

DHSUD has adopted policies, strategies, and laws relating to land use, housing, and the formation of homeowners’ associations since its inception (HOAs).

Providing services in the midst of a pandemic

Despite the Covid-19 epidemic, the DHSUD and its KSAs kept working “in order to bring the formation of their new department into purpose.”

The NHA supplied 115,132 units in 2020, with an emphasis on the requirements of low-income and disadvantaged urban families.

Meanwhile, Pag-IBIG Fund has an all-time high financial statement in 2020, with PHP31.13 billion in savings and PHP63.75 billion in loan takeout, resulting in a 93.68 percent dividend basis for its members.

The DHSUD has enabled the accreditation of 29 socialized housing projects as well as the certification of 50 major condominium and subdivision projects’ escrow agreements.

DHSUD has a policy on loan moratoriums in housing finance, as well as the relocation of deadlines and interruptions of periods for compliance with regulations, which benefits more than 5.5 million members as the epidemic continues.

Collaboration on the ground

Local government units (LGUs) have made a significant contribution to the successful execution of housing programs, according to Del Rosario.

Despite the epidemic, work proceeded, with seven home developments being presented in December of last year.

Memorandums of understanding (MOAs) with local governments also opened the door for the development of additional housing projects and relocation locations for ISFs throughout the country.

“These pacts demonstrate President Duterte’s commitment to providing affordable and decent housing to underprivileged Filipino families, and by forging strong ties with local governments, DHSUD will be able to reach out and assist the vast majority of Filipinos who wish to own a home,” the housing czar said.

This year, Del Rosario hopes to sign more than 50 such MOAs.

In order to enhance different initiatives, the housing department formed agreements with other government line departments.

Deals with the Homeowners Association Federations and Confederations and the Department of Interior and Local Government (DILG) are among them, as is the formation of a technical working group that will institutionalize the department’s efforts to go after illegal developers and bogus brokers engaged in the illegal sale of real estate properties, thanks to a joint memorandum of understanding on anti-illegal real estate.

Starting in Umingan, Pangasinan, the DHSUD carried out housing projects for farmers in collaboration with the Department of Agrarian Reform.

The agency and the Department of Transportation worked together to ensure that ISFs affected by the North-South Extension Railway Project was appropriately relocated.

DHSUD has mandated land use planning and zoning requirements for local governments to formulate Comprehensive Land Use Plans and Zoning Ordinances in order to increase disaster risk management and climate adaption efforts.

It has also collaborated with other organizations to put its disaster preparation and response mandate into action, including the Covid-19 epidemic, the Taal Volcano eruption, and the Naga, Cebu landslide.

Housing plan for the next 20 years

To maintain the housing sector’s initial efforts, the Department of Housing and Urban Development (DHSUD) developed a 20-year housing and urban development strategic roadmap titled “Sustainable Housing and Well-planned Community for All Filipinos,” with the goal of providing adequate and affordable housing for Filipinos.

Del Rosario said that it would encompass strategic goals and initiatives till 2040, which is in line with the National Economic Development Authority’s “AmBisyon Natin 2040” development plan, both of which reflect the long-term vision and ambitions of Filipinos.

He went on to say that the national housing strategy plan aims to speed up the construction of high-quality yet affordable housing developments in collaboration with the private sector.

The 20-year strategic plan, according to Del Rosario, will guarantee that housing initiatives and urban development programs in the nation continue beyond this year.