The Supreme Court’s ruling that Republic Act 11479, or the Anti-Terrorism Act (ATA), is constitutional, with two exceptions, was a clear and convincing win for law-abiding and responsible individuals.

On Sunday, Secretary of the Interior and Local Government Eduardo Ao emphasized that the ATA is the state’s primary instrument for pursuing terrorist groups.

“Rest assured, we will make the necessary modifications to comply with the high court’s judgment and continue to strictly execute the ATA as a method of protecting the Filipino people from any and all acts of terrorism,” he said in a radio interview.

The Office of the Solicitor General, according to Ao, will not appeal the two deleted sections since it is satisfied with the Supreme Court’s judgment.

He praised Solicitor General Jose Calida’s handling of the case, noting that 35 of the 37 provisions were found to be constitutional.

“While we await the whole verdict, we applaud, respect, and acknowledge the Supreme Court’s decision to strike down only two elements of the entire law.” “The fact that only two minor provisions have been found illegal demonstrates that the law as a whole is valid and constitutional,” Ao explained.

He said that the two clauses were minor and would have no impact on the law’s overall implementation.

Section 4 of the ATA, which states “…which are not intended to inflict death or significant physical harm to a person, to jeopardize a person’s life, or to create a serious risk to public safety,” was found illegal by a 12-3 vote on Thursday, according to the SC recommendation.

Furthermore, the law’s second method for designation, which states that “requests for designations by other jurisdictions or supranational jurisdictions may be adopted by the ATC (Anti-Terrorism Council) after determination that the proposed designee meets the criteria for designation of UNSCR (United Nations Security Council Resolution) No. 1373” was voted unconstitutional 9-6.

The United Nations Security Council passed Resolution No. 1373 on September 28, 2001, in the aftermath of the September 11 terrorist attacks in the United States.

The resolution established the Counter-Terrorism Committee to monitor governments’ adherence of its provisions and specified a wide counter-terrorism role for the international community.

“We are not endorsing any particular group, but the law will now distinguish between an activist and a terrorist.” As a result, if you’re an activist, you can hold a protest, a demonstration, or a boycott. Those are not a problem. “You are not a terrorist,” Ao stated emphatically.

Likewise, the Philippine National Police (PNP) stated that the ATA can be used to combat insurgency, terrorism, and other types of lawlessness.

In a statement, PNP commander Gen. Dionardo Carlos stated, “Overall, we still consider the law as favorable to the greatest interests of law and order.”

He agreed with Ao that the law will not be abused because it has been clarified that simple expressions of advocacy or opposition, as well as other similar civil and political rights activities, are not considered terroristic acts.

“As a result, freedom of expression is maintained and respected,” Carlos concluded. 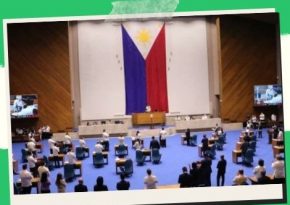 The House of Representatives passed a bill enhancing mental health […]

Higher alert level in NCR may not be required: WHO exec

According to World Health Organization (WHO) country, representative Dr. Rabindra […]

In the midst of a pandemic, the national vaccination program is a silver lining.

Even in the face of an increase in coronavirus disease […]