According to the most recent PUBLiCUS Asia Inc. survey, Ferdinand “Bongbong” Marcos Jr. will have high expectations for his first 100 days in office.

68 percent of respondents to the 2022 PAHAYAG Second Quarter Survey (2022 PQ2), which was conducted from June 16 to 22, indicated they anticipate Marcos Jr. performing “good” or “very well” during his first 100 days in office.

“According to our survey, about two-thirds of Filipinos think President Bongbong Marcos will do well in his first 100 days in office. For President Marcos Jr. to live up to these high expectations, he will need to get started right away “In a news release on Wednesday, Atty. Aureli Sinsuat, executive director of PUBLiCUS, said.

The top three concerns Marcos should concentrate on, according to the respondents, are the economy, jobs, and education.

“It would take longer than 100 days to fully address concerns like economic growth, job creation, and educational reform. However, if these pressing issues are given top priority by the new president and his team during their first few months in office, it can be anticipated that public opinion of the Marcos Jr. government will stay largely favorable “Says Sinsuat.

Sinsuat also pointed out that the majority of survey participants supported the continuation of five significant Duterte administration policies.

The continuation of “Build, Build, Build” received the highest acceptance rating among the 14 issues examined in the study (79% of respondents stated they approve).

“It is not surprising that a sizable majority of respondents support the continuation of President Duterte’s key projects given his ongoing popularity, Sinsuat added.

It is reasonable to assume that public opinion on the Marcos Jr. administration will be influenced, at least in part, by its capacity to continue and improve upon at least some of the Duterte administration’s more well-liked flagship programs, even though the degree of policy continuity between the outgoing and incoming administrations remains to be seen “And Sinsuat.

PureSpectrum, a US-based panel marketplace with global reach, randomly selected the 1,500 registered Filipino voter respondents who took part in the 2022 PAHAYAG Second Quarter Survey from its national panel of more than 200,000 Filipinos.

MANILA – It’s a bet on the president. Vice President […]

MANILA – According to the National Wages and Productivity Commission […]

Lakas sends a message of togetherness to candidates and political parties.

The Comelec has postponed a decision on a plea to reopen the COC filing process.

The Commission on Elections (Comelec) met on Wednesday with a […]

By June, a Duterte adviser advises that booster cards be required. 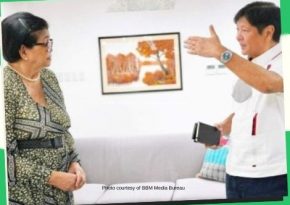