TV5 was required to provide permissions in order to obtain NTC approval.

TV5 was required to provide permissions in order to obtain NTC approval.

The National Telecommunications Commission (NTC) stated on Wednesday that before approving TV5 Network Inc.’s investment agreement with ABS-CBN Corp., the NTC required the company to get permits from numerous national government agencies and local government units.

NTC Commissioner Gamaliel Cordoba stated during a hearing of the House committees on legislative franchises and trade and industry that a memorandum order has been issued requiring a franchise holder to have no unpaid debts to the federal and local governments before it can enter into a business agreement with another entity.

“So for purposes of this, before we approve the commercial agreement that is under the jurisdiction of the National Telecommunications Commission, we shall obtain the necessary clearances from the Department of Finance, the Bureau of Internal Revenue, and the Bureau of Customs, among others, and shall do so concurrently with the franchise holder,” the statement continued.

According to Cordoba, the NTC would also grant clearances in the event that the franchise holder had no unpaid debts or open administrative cases.

Specifically, to fund the government’s response and recovery operations for the coronavirus pandemic, Cordoba stated that the commission will enforce the collection of taxes.

He added, “So if TV5 were to continue its deal with ABS-CBN, we would request that the aforementioned certifications be provided to the NTC before we could ratify the commercial agreement that they engaged into.

For its side, the SEC General Counsel Romuald Padilla claimed that at first, ABS-CBN “refused to cooperate” with the commission’s request for copies of the investment agreement by simply submitting an executive summary of the agreement with TV5.

According to Padilla, the investors could not make an educated choice since “not all or complete” important facts were disclosed.

He said that ABS-CBN only provided redacted copies of the investment agreement following a show-cause notice from the SEC.

To be sure that the shares, notes, and transactions covered by the agreement are exempt from registration under applicable Securities Regulation Code sections, he underlined the necessity for the SEC to thoroughly review the agreement’s provisions (SRC).

The officer in charge of the Philippine Competition Agency (PCC), Johannes Bernabe, announced that the commission will investigate whether the merger of the two networks would likely or significantly diminish competition in the sector.

Based on a very quick analysis of the facts, Bernabe stated, “the grounds for conducting a motu-propio review will also have to include a first assessment of whether the transaction is likely to produce a decrease of competition.”

In order to resolve the concerns highlighted by lawmakers and the NTC, ABS-CBN Corp. and TV5 Network Inc. have decided to postpone the termination of their investment agreement, according to a statement.

The two networks stated that the break would provide them “the space for both media organizations to respond to the challenges, and accommodate any applicable revisions to the conditions.”

Earlier, the ABS-CBN Corporation declared its intention to pay PHP2.16 billion for 6.46 million additional common shares of TV5 Network Inc., or 34.99 percent of its whole voting and outstanding capital stock.

After the transaction, MediaQuest Holdings, Inc., the company that runs TV5, will hold 64.79 percent of the voting and capital shares and continue to hold the majority of the network’s controlling stock.

MANILA – Given the PHP12-trillion debt overhang, the chairman of […] 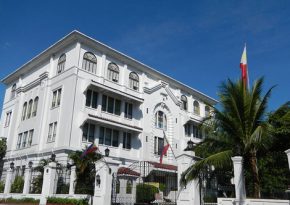