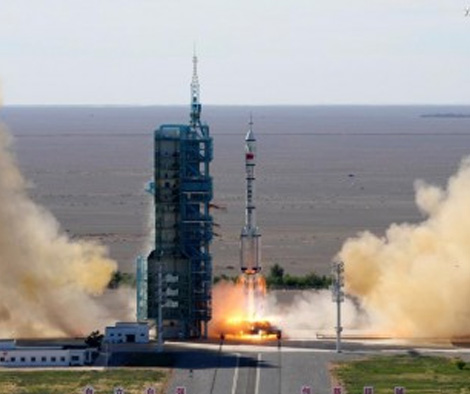 China successfully launched the Shenzhou-12 crewed spacecraft on Thursday, which will carry three astronauts to the Tianhe space station core module for a three-month mission.

It’s China’s eighth crewed trip to space, and the first since the country’s space station was built. It’s also the first time the nation has sent a human mission in almost five years.

According to the China Manned Space Agency, the spacecraft was launched from the Jiuquan Satellite Launch Center in northwest China’s Gobi Desert at 9:22 a.m. (Beijing Time) on a Long March-2F carrier rocket (CMSA).

Shenzhou-12 separated from the rocket 573 seconds after launch and reached its intended orbit.

The Shenzhou-12 crew is in excellent health, and the launch went off without a hitch, according to the CMSA.

Commander Nie Haisheng, a 56-year-old veteran of the Shenzhou-6 and Shenzhou-10 missions, Liu Boming, 54, who was on the Shenzhou-7 mission, and Tang Hongbo, 45, who is on his maiden space mission, are the three astronauts.

The Shenzhou-12 spacecraft will meet and dock with the Tianhe space station core module in orbit, creating a complex with Tianhe and the cargo freighter Tianzhou-2. In the core module, the astronauts will be stationed.

According to CMSA director Hao Chun, their job would be more complex and difficult than past crewed missions.

At a news briefing conducted at the launch site on Wednesday, Ji Qiming, assistant to the CMSA director, said that the Shenzhou-12 crew would perform four important tasks in orbit.

They will first operate and manage the complex, which will include the Tianhe module’s in-orbit test, verification of the recycling and life support system, testing and operation training of the robotic arm, as well as material and waste management.

China launched the Tianhe space station core module on April 29 and the Tianzhou-2 supply ship on May 29.

On May 30, the two performed a computer-controlled rendezvous and docking in preparation for the first crewed mission to unload the payload.

According to the China Academy of Space Technology (CAST), Tianzhou-2 delivered more than 160 big and small items in late May, including supplies for personnel and space-science equipment.

It is a crucial technology for a long-term crewed trip, according to Hao, since it ensures the astronauts’ safety and ability to operate in space.

Meanwhile, EVAs will become more frequent for astronauts in future space station building trips, presenting new difficulties for them, according to Hao.

EVAs, he added, would be a thorough examination of the technologies in EVA spacesuits and supporting equipment, as well as the astronauts’ operation, commanding, and coordination.

According to Hao, the two EVA spacesuits for this mission have been upgraded to allow for more complex and longer-duration activities, and the spacewalk will be supported by a range of equipment both within and outside Tianhe, including a mechanical arm.

“We will be more competent and experienced in EVA after completing the exam. In the missions that follow, EVA will be routine labor that must be completed “he said

The upgraded spacesuits, both conceived and built by Chinese engineers, can allow astronauts to conduct EVAs for seven to eight hours, according to Liu Weibo, deputy chief designer of China’s manned space program’s astronaut system.

According to the CMSA, the Tianzhou-3 cargo vehicle and the Shenzhou-13 manned spacecraft will dock with Tianhe later this year, and another three astronauts will begin their six-month tenure in orbit.

Following the five launch missions this year, China intends to launch six additional missions in 2022 to finish the building of the space station, including the launch of the Wentian and Mengtian lab modules, two cargo spacecraft, and two crewed spaceships.

SPACECRAFT. On June 17, 2021, the crewed spacecraft Shenzhou-12 is launched from the Jiuquan Satellite Launch Center in northwest China’s Gobi Desert on a Long March-2F carrier rocket. It’s China’s eighth crewed trip to space, and the first since the country’s space station was built. (Li Gang/Xinhua)