For the local government units (LGUs) nationwide in 2023, the Department of Budget Management (DBM) has allotted around PHP962.2 billion to improve their capabilities and expedite the delivery of their essential services.

According to a press release from the DBM on Wednesday, the projected national budget of PHP5.268 trillion for 2023 includes approximately 18.3% of the funds allocated to local government units (LGUs).

According to the Mandanas-Garcia Supreme Court (SC) decision, about PHP820.27 of the PHP962.2 billion will be used for the National Tax Allotment (NTA) shares of LGUs, according to the DBM.

According to the Supreme Court’s decision, local government units (LGUs) receive a larger share of the national tax collections because their internal revenue allotment (IRA) is supposed to come from 40% of all national taxes collected by the Bureau of Internal Revenue (BIR) and the Bureau of Customs (BoC).

According to the previous structure, the only source of the LGUs’ IRA share was the taxes that the BIR collected.

The IRA was renamed NTA as part of this year’s implementation of the SC decision.

However, the Local Government Support Fund (LGSF) for LGUs would be increased by PHP10.91 billion from the PHP17.97 billion appropriated in 2022 to PHP28.88 billion for 2023, according to the DBM.

The PHP28.88 billion LGSF, according to the DBM, is divided into three components: PHP5 billion in cash assistance for all level LGUs, except those in the Bangsamoro region; PHP10.00 billion for the Support to Barangay Development Program; and PHP13.88 billion for the provision of the Growth Equity Fund as financial assistance to the identified poor, disadvantaged, and lagging LGUs (SBDP).

During the Senate briefing on the proposed national budget for 2023, Pangandaman stated, “With a total allocation of PHP962.2 billion for LGUs, we seek to strengthen our efforts in capacitating and empowering them to offer basic services to their citizens autonomously.”

According to Pangandaman, the assistance to LGUs would ensure the execution of projects and programs for the agriculture sector, the development of infrastructure and information and communications technology systems, the building and renovation of public spaces, and disaster response, recovery, and rehabilitation.

The economic reform plan will be carried out with the local government’s assistance, adding that “despite the restricted fiscal space, we tried to boost some of the budget allocations for LGUs.”

Benhur Abalos Jr., the local government secretary, advised the 430 LGUs that would benefit from the PHP1.25 billion support fund on Tuesday to help them carry out devolved tasks and services, particularly on initiatives that would be most helpful to and responsive to their residents.

A confirmation of information that reached the Office of the […] 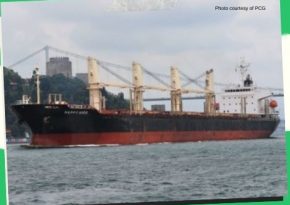 Following a collision with a Filipino fishing boat off the […]