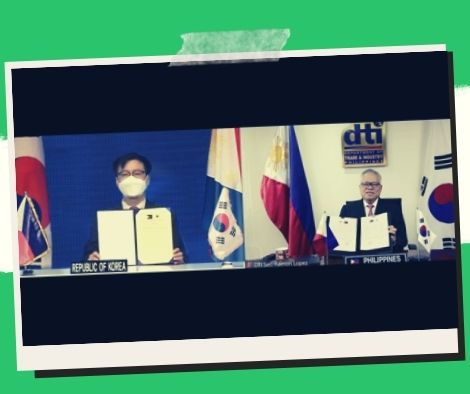 The Philippines and South Korea’s top trade officials have formally finished discussions on a free trade agreement (FTA) to strengthen trade and investment links between the two countries.

“We are pleased that our trade talks with South Korea have been successful. During the signing ceremony on Tuesday, Department of Trade and Industry (DTI) Secretary Ramon Lopez expressed gratitude to Minister Yeo (Han-Koo) and the Ministry of Trade, Industry, and Energy (MOTIE) for their continued collaboration in facilitating wider economic cooperation with our Philippine trade department.

The final talks, according to Lopez, were about improving market access for Philippine bananas and processed pineapples in South Korea.

Lopez applauded this move because these agricultural items had not previously been included in the list of goods eligible for tariff reductions, and the implementation term had been reduced from 15 years to five or seven years.

The DTI chief stated that the bilateral FTA with Seoul will complement the Asean-Korea FTA and the recently negotiated Regional Comprehensive Economic Partnership trade agreements with the East Asian country (RCEP).

“This would encourage commerce and perhaps allow for additional investments from Korea, offering openings for Korean companies and industries to diversify and grow their economic interests in other ASEAN nations,” he added.

According to Lopez, both parties hope to sign the FTA by February 2022.

Even after the FTA is signed, the two nations will continue to negotiate treaties on trade in services and investments “a year after the FTA enters into force.”